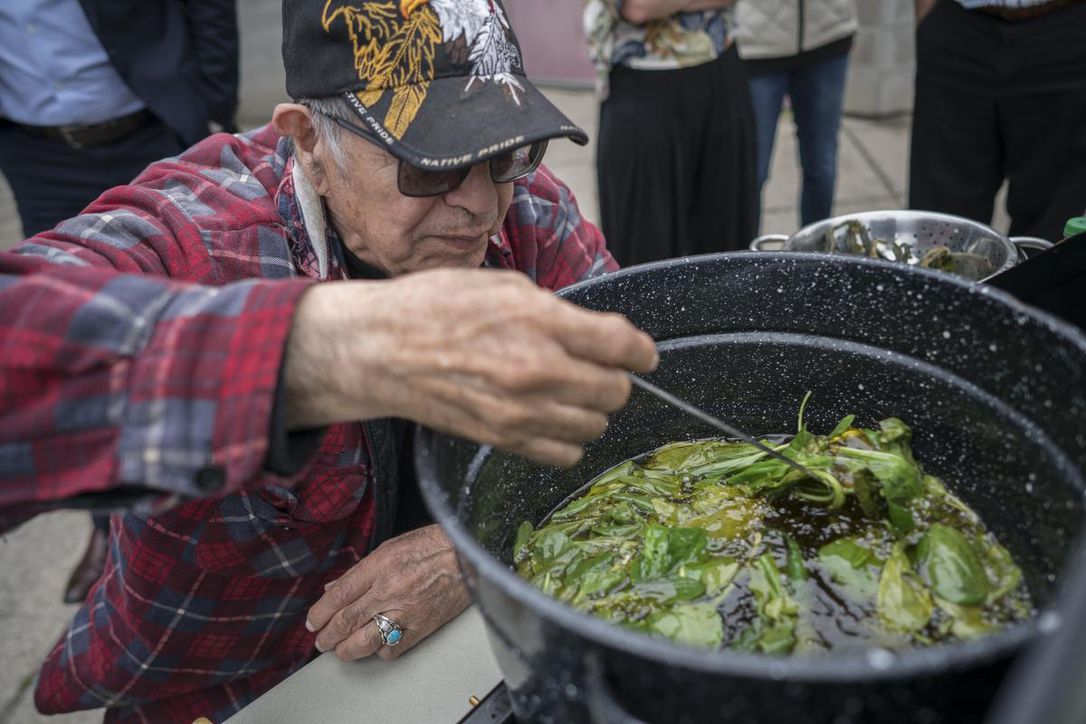 Indigenous Peoples are Leading in Protecting Our Land

Elder Garry Sault makes a healing salve out of local plants comfrey, plantain, olive oil, and bees wax during a conference on expansion of Indigenous protected areas in Canada at the University of Guelph. Photo: J.P. Moczulski / for the Toronto Star

As the fire season intensifies and communities face new rounds of drought and flooding, concerns about the health of the planet deepen. But this summer may also bring cause for hope.

When the United Nations recently issued a dire report on the state of the natural world, it identified an important bright spot. Lands and waters managed by Indigenous Peoples tend to be healthier than other areas. These traditional territories, though still facing threats, sustain the animals, plants, clean air and fresh waters that are in dangerous decline elsewhere.

I see this in our communities across the country. Our elders call on us to exercise our responsibility “to take care of the land and it will take care of us.” In our territories, evidence shows there is better news for the future of caribou, lynx, salmon and other animals. Indigenous elders, youth and a new generation of Indigenous women leaders are ensuring the land supports us.

Now Indigenous-led stewardship is taking on even greater significance. Canada committed to protecting at least 17 per cent of lands and freshwaters by 2020, as part of the global effort to preserve biodiversity. But so far it has protected only 11.8 per cent. That puts it last among major world economies.

The biggest opportunity to make progress toward the goal comes from Indigenous protected areas.

In the coming weeks, Environment and Climate Change Minister Catherine McKenna will have a chance to act on this opportunity.

Dozens of Indigenous Nations have brought forward proposals for protected areas as part of the Canada Nature Fund. By supporting Indigenous-led conservation, the minister can provide vital momentum for these proposals. She can strengthen nation-to-nation relationships. And she can show the world that Canada will reach conservation targets for 2020 and beyond.

Many Indigenous nations are leading the way.

Edéhzhíe moved Canada closer to its conservation goal. Now other Indigenous-led proposals can do the same. The Sahtúgot’ine Dene believe they have a responsibility to conserve Great Bear Lake — the eighth largest lake in the world — for all of humanity. They propose protecting the lake’s watershed, which stores 4.6 billion tons of carbon safely underground. That’s the equivalent of over 23 years’ worth of Canada’s annual greenhouse gas emissions.

Federal investment will help advance these and other Indigenous-led proposals. It will honour Indigenous Nations’ rights and responsibility to ensure the future of our lands. And it will deliver big conservation gains.

The public supports strong action. Nearly nine out of 10 Canadians want the country to protect at least 17 per cent of lands by 2020, according to a new Abacus Data poll conducted for the International Boreal Conservation Campaign. And 80 per cent support a federal program to fund Indigenous protected areas.

Minister McKenna has consistently spoken about the need to invest in Indigenous stewardship. And she has vowed to ensure Canada is a global leader on conservation. If she decides to support several large-scale Indigenous protected areas she will solidify her legacy as a champion of nature.

This is the time for boldness. The UN report confirms that Indigenous peoples are the stewards of some of the largest healthy landscapes left on the planet. Indigenous nations in Canada are coming forward in the spirit of partnership to conserve these lands. Together we can help make progress toward a brighter, more vibrant future.

Grand Chief Ed John (Akile Ch’oh), Tl’azt’en Nation in British Columbia, is a former Expert Member of the United Nations Permanent Forum on Indigenous Issues and was involved in the development of the Declaration on the Rights of Indigenous Peoples, adopted by the United Nations General Assembly. He is special Adviser to the B.C. First Nations Summit.